This Morning made us a BABY! Couple claim they fell pregnant by following the show’s drug-free conception plan – including going vegan and ditching chemical cleaning products

A couple who appeared on a This Morning fertility clinic have revealed the programme’s ‘conception plan’ helped them get pregnant.

Kathryn and Dan Edwards, from the Midlands, were informed by the GP that they both suffered from fertility problems, and that their chances of falling pregnant were greatly reduced. After trying for three years, they took part in a This Morning fertility clinic in Devon, and went on to change their lifestyle in accordance with the programme’s four- month conception plan, devised by Dr Larisa Corda. 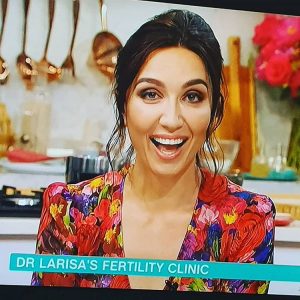 There’s nothing I love more than being able to help as a doctor. It’s what made me chose my profession and spend all those years training. And today was one of the most emotional days of my career, being able to reveal the fact a couple struggling to conceive for 3 years and denied treatment on the NHS because of an unfair funding system, are finally pregnant naturally after going on #theconceptionplan 🎉💖 In addition to which I got to help all those who called in to my fertility clinic and receive all your beautiful messages of gratitude to tell me how much this clinic means to you. Throw in a surprise announcement from a caller from last year who called for advice and has now had a baby! And see that the events of the day made the @dailymail 🙌🙌🙌 This is huge!

The fact the media is responding and drawing attention to such an important cause, encouraging conversation and helping so many as a result, is just the best news ever. I couldn’t be prouder of being a doctor today and continuing to campaign for all the men and women out there who should not be suffering 💖 So thank you @thismorning for letting me do this and being so incredible at supporting all those who need it most