The significant milestone that IVF has reached last week, 41 years since it’s development, relates to enabling over 8 million children to exist in the world that may never have done so, with a science that is spreading and becoming accepted globally, allowing over half a million babies to be born per year. This is an amazing achievement and even more so because countries such as the UAE and Saudi Arabia, places where IVF was once considered tabboo, are now some of the global leaders in the provision of this healthcare.

It is believed that the increased uptake of IVF is to do with a rising population, increasing levels of infertility as well as a greater awareness of its benefit. The point with infertility is that is doesn’t discriminate on the basis of any gender, race, ethnicity nor politics. It can affect anyone at any given time and releasing the barriers to this necessary technology to be able to help is a matter of human rights. 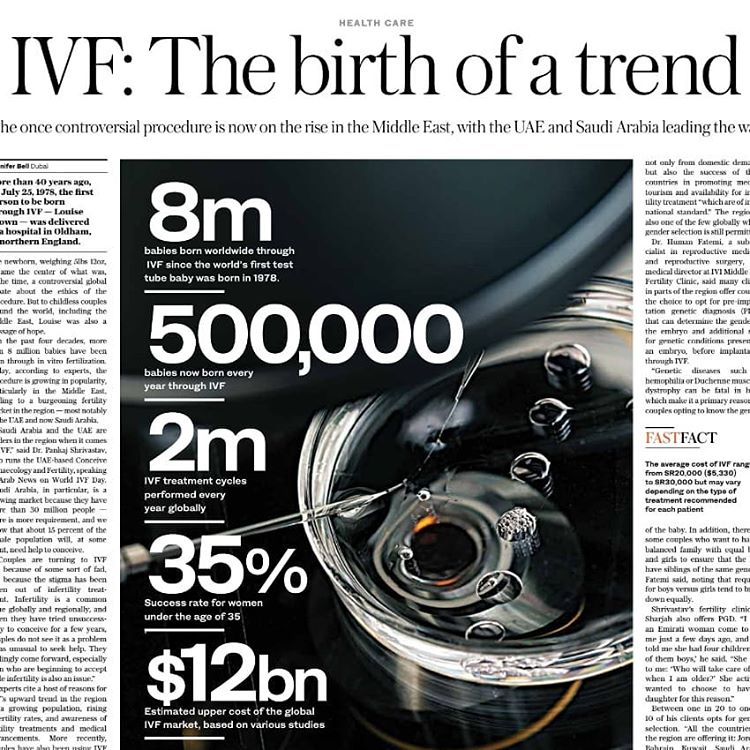 However, whilst I am thrilled to see the increasing spread of this science globally, what is causing some concern is the reasons behind why this technology is being used. There is a growing number of people, not just in the Middle East but internationally, who turn to IVF for sex selection purposes. Whereas sex selection in the UK is allowed only on the basis of avoiding transmission of specific gender related inheritable conditions, it is not allowed for any other reason, including the concept of family balancing.

Whereas I can understand this may be compelling for some, the danger is that by interfering with the process of natural selection unnecessarily may cause more harm then good for our population as a whole, if done on a larger scale. Not to mention the slippery slope we may create by allowing people to discriminate against certain traits and characteristics based on their own set of values and prejudices, in other words, designer babies.

As with any technology that has significant power, it must be used responsibly and with the highest degree of ehtical intent behind it. We must ensure it’s driven by morals and principles that ensure fairness of access and support but prevent any possible exploitation for personal gain.