It’s when Parliament took on Women’s Health as an issue that was debated in Westminster on the same day that a general election was announced! 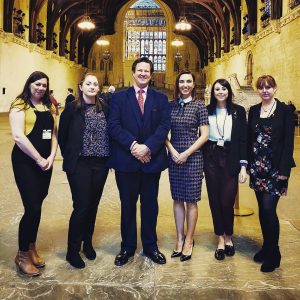 The brilliant Alec Shelbrooke gave an impassioned speech about the emotional, psychological, physical and social burden of endometriosis and why it’s an issue that needs discussing, not just at schools but also in the workplace and amongst health professionals, where endometriosis is woefully under diagnosed and can take up to 10 years to identify.

This is 10 years too long, of horrific suffering endured by women who are told that their period pain is normal by doctors, and to man up and get on with it by employers. It is unacceptable and shameful that a condition which affects 175 million women worldwide, and which carries such a significant crippling effect on a woman, her self identity, her relationships, her ability to do normal daily activities and her career, is still treated as a taboo subject.

So much of the pain and suffering is preventable

We must act now to stop any more of the shame and mental health impact this condition is having, just because we haven’t got the awareness nor the policies needed to alleviate this. Endometriosis and the repercussions such as infertility, is not a private issue but a subject of national policy debate, something that was obvious today when every single person in the room, Conservatives, Labour and Liberal Democrats, men and women, came together to say YES to redefining the culture around endometriosis.

I was honoured to be present with the wonderful girls, Endometriosis NESS, Nat Blake and Alexa Chung, all of whom do so much to raise awareness of this condition. And thank you to everyone who contributed to the petition that collected over 2000 personal stories that were submitted to Parliament. Watch this space, change is on the horizon and we won’t stop until we get it on behalf of all the girls and women who are currently suffering.